Do you want to participate with your band or wind orchestra in the Genève Music Band Contest in Geneva?

Take it easy. Choose your hotel together with our team, who will help you find the best travel and accommodation solutions based on your needs.

– Double / twin studio € 62 per night + tourist tax: € 0.77 per person / per night
With breakfast included. Studio with a living room, bed linen, an office area, an equipped kitchen (electric hobs, fridge, microwave and dishes), a bathroom, a TV, a balcony with Jura or Mont Blanc orientation.

30% of the price must be paid at the booking and the 70% missing, 15 days before arrival at the residence.

NEARBY HOTELS WITHOUT CONVENTION

in Geneva is waiting for you!

Tell us what you need

Geneva is the second most populated city and the second financial center of Switzerland after Zurich, located where Lake Geneva flows back into the Rhone river. Commercial, banking, industrial, intellectual and university center extends to the south-west end of Lake Geneva, on the two banks of the Rhone, in the heart of a closed basin surrounded by mountains (all in French territory: the Voirons, the Salève, the Mont de Sion, the Vuache and the Jura mountain range).

La vieille-ville (historical part of the city), consisting of the city center and Saint-Gervais districts, was formed on the top and the surroundings of a hill on the left bank of the lake. This hill has been a natural refuge protected from the lake, the Rhone, the Arve, the marshes and the moats to the east since prehistoric times. The city expanded during the nineteenth century, after the demolition of the fortifications (1850-1880).

In the bay of Geneva the pierres du Niton are visible, two rocks that emerge from the lake and date back to the last ice age. These are two erratic and very stable boulders; for this reason one of the two was chosen by General Guillaume-Henri Dufour as a reference point for the average height of the lake and subsequently adopted for the calculation of all altitudes in Switzerland.

In 2000, the city received the Wakker prize of the Swiss National Heritage Association for its plan to modernize the banks of the Rhone and the surrounding urban environment. The Fil du Rhône project was then progressively put into operation.

According to the Federal Office of Statistics, Geneva has an area of ​​15.88 km. 92.1% of this area corresponds to inhabited areas or infrastructures, 1.5% are agricultural areas, 3.1% woodland areas and 3.2% unproductive areas.

The first inhabitants of the area in the protohistoric period would have been the Ligurians, while in historical times, when they arrived, the Romans found the Allobrogi Gauls. Occupied by Julius Caesar in 58 BC, it became a fortified settlement, part of the Roman province of Gallia Narbonensis.

Monuments and places of interest

Geneva’s main tourist attractions include the Reformation Wall, the flower clock, the Brunswick Monument to Charles II, the Jet d’eau (Water Jet) and the Palais des Nations, which houses the European headquarters of the United Nations .

One of the most visited monuments in the city is the Cathedral of San Pietro, located at the top of the old city. An underground museum presents the evolution of the site and the introduction of Christianity in the city. The International Museum of the Reformation, located in the Maison Mallet, presents the history of the Protestant Reformation and its major exponents. An underground corridor, reopened for the opening of the museum of the Reformation, connects the two buildings. The entire site, which includes the cathedral and its towers, the museum and the Auditorium of Calvino, is called the Éspace Saint-Pierre and is one of the major cultural offerings of the city.

Another place appreciated by tourists is the old town itself, which preserves the typical architecture of an 18th century European city. Numerous famous people have lived in this part of the city, including Jean-Jacques Rousseau, Franz Liszt and Jorge Luis Borges.

In any case, the symbol of Geneva remains the jet of water, located at the end of the Eaux-Vives bank. The jet culminates at about 140 meters in height and is visible from a good part of the city. 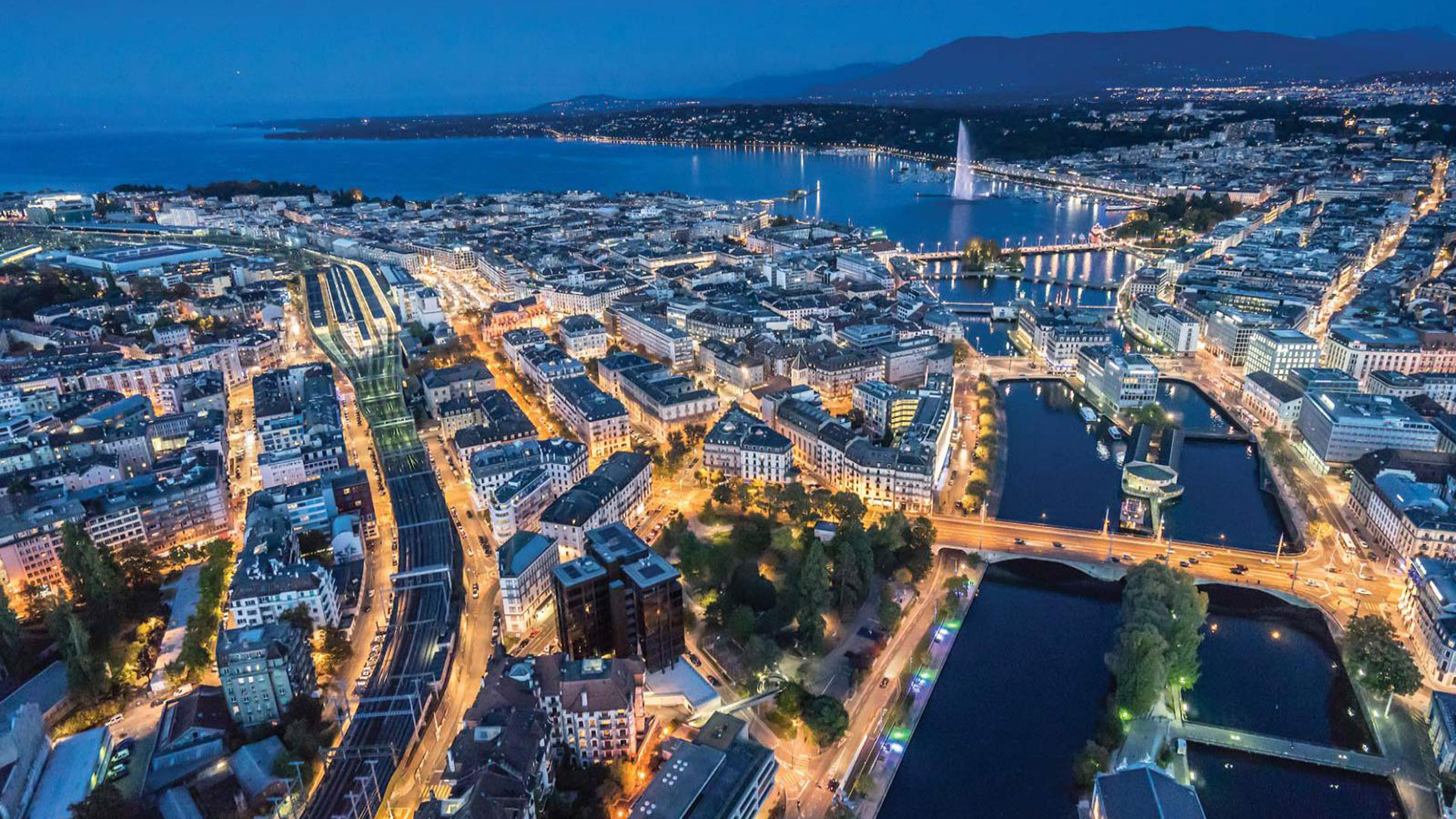 Many religious communities are present in Geneva. Although Geneva was formerly called the “Protestant Rome”, the number of Catholics has steadily increased with immigration from Latin countries. The Jewish community is one of the oldest in Geneva, while the Muslim community has emerged more recently. The buildings linked to the Protestant cult are the most widespread, however there are also Catholic churches, Orthodox churches and synagogues.

Between 1700 and 1853, the only cemetery of the city is that of Plainpalais. At the beginning of 1850, the Châtelaine cemetery was built, followed by the Saint-Georges cemetery around 1880. The Petit-Saconnex cemetery will be integrated into the city in 1931 following the aggregation of this municipality in Geneva.

At the end of the nineteenth century studies were carried out in anticipation of the construction of a crematorium at the Saint-Georges cemetery which was inaugurated in March 1902. Next to this installation, a columbarium was also built, then enlarged in 1916, and in 1907 it was built a second crematorium. The cemetery will then be totally modernized in 1942 and in the following years other funerary centers were built, such as the Chapelle des Rois (1956) and the funeral center of Saint-Georges (1976).

Plainpalais
In 1869, Geneva took possession of the Protestant cemetery of Plainpalais (also called cimetière des Rois, meaning cemetery of the Kings) which, however, was closed to ordinary burials in 1893 and reserved only for those who obtain a concession. Since the price of this concession is higher than in other cemeteries, the number of burials fell and the tradition of burying the State Councilors, Administrative Councilors and other personalities arose. Around 1945 some renovations were carried out which made the place more like a park.

Châtelaine
Opened in 1853, the cemetery known as du Lazaret (del Lazzaretto) is initially reserved for Catholics. Since 1864, the dead have been buried there on the right bank of the Rhone and is considerably enlarged. However, the marshy nature of the land poses numerous problems, and drainage works must be carried out. Between 1899 and 1911, the number of burials is therefore limited to the minimum necessary. This cemetery was completely reopened in 1918. Since 1946 the burials have been limited again, and are subsequently restricted from 1969 to reserved spaces.

Saint-Georges
The cemetery was opened in 1883, but during the first 10 years only half of the space was used. In 1898, by means of a convention, the municipality of Lancy sells land so that the surface of the site can be increased. In general, Saint-Georges welcomes all the people who died on the left bank of the Rhone. In 1911, the cemetery was again enlarged, being presented as the only cemetery available for ordinary burials of persons domiciled in Geneva. A special and free space will be granted to German soldiers who died in Geneva during the First World War. Between 1942 and 1944 the site is cultivated, and several tons of vegetables and cereals are harvested every year. In 1945 the eastern part is transformed into a park. The painter Ferdinand Hodler and the philosopher Afrikan Špir are among the personalities buried in this place.​

Numerous parks, covering more than 310 hectares (that is approximately 20% of the territory) form large spaces of fun and relaxation scattered among the various districts. Most of them, located on the shore of the lake, surround large buildings and offer high quality tree furniture. Some parks were initially large private properties that were later bought or offered to the city over the years. Their maintenance is ensured by the “Service des espaces verts et de l’environnement” (Service of green spaces and the environment).

The Rousseau island, originally “Island of the boats”, today named in homage to Jean-Jacques Rousseau, is located on the Rhône between the pont du Mont-Blanc and the pont des Bergues, and welcomes many birds.

Most of the showrooms in Geneva are publicly owned. Some are now real institutions while others, oriented towards independent companies, manage to organize complete seasons. There are also some rooms without artistic directions, which are rented to local companies.

Ernest Ansermet and the Orchestra of the Romandie Switzerland, the Grand Théâtre, Victoria Hall, Armin Jordan, L’Usine, Artamis or the Chat noir contribute to the local and international reputation of the city.

Geneva also welcomes several theater companies that were born there, or decided to install it.

Except for the Grand Théâtre ballet, which has a stable stage for rehearsals and a performance hall, Genevan dance companies do not have fixed halls. Defended by the Association pour la danse contemporaine (association for contemporary dance), these companies are pushing for the creation of a dance house in Geneva.

Numerous events take place throughout the year, including: